Greater Phoenix: A place to learn and grow

The Greater Phoenix region features nationally ranked schools and globally renowned universities, all geared toward preparing a talented workforce for the in-demand jobs of today and tomorrow. Innovative programs at the K-12 level and access to institutions of higher learning focused on research and development make Greater Phoenix a great place to learn and grow.

More than 40 higher education institutions across the Greater Phoenix region provide an opportunity for advanced learning.

Higher education certification and degree programs ranging from manufacturing technology to bioscience provide plenty of options for your career.

With a host of career opportunities for students, 58% of ASU graduates remain in the state of Arizona following graduation.

Source: Arizona Board of Regents

Greater Phoenix: By the Numbers

Arizona State University has been ranked the #1 most innovative university in the nation five years in a row.

4 public schools in Greater Phoenix were recognized as National Blue Ribbon Schools by the U.S. Department of Education. The region’s public school system consists of more than 1,000 public schools, and Greater Phoenix has a strong system of charter schools—many of which are nationally ranked. Such schools offer diverse, specialized curricula, such as Phoenix’s Bioscience High School, which emphasizes science, technology, engineering and math instruction. Other schools include those with specializations in fine arts, including the Arizona School for the Arts. 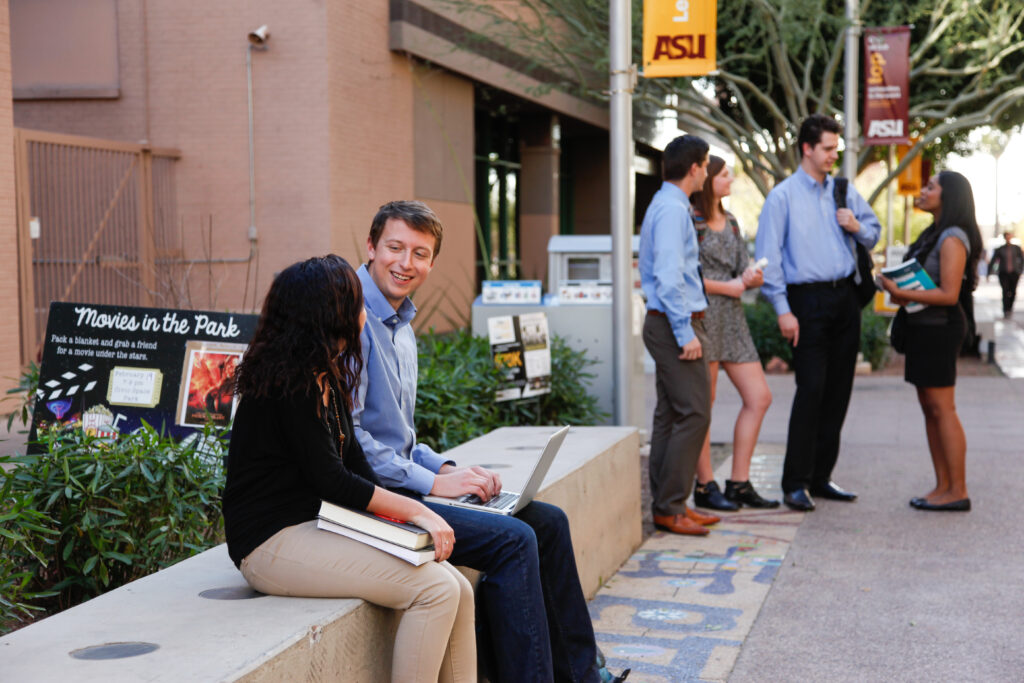 Arizona State University is a world-renowned institution, with a student population of nearly 75,000 across five metropolitan campuses. It is ranked #5 in the nation for best-qualified graduates, according to the Wall Street Journal.

Arizona State University is one of the largest public universities in the United States with nearly 120,000 students enrolled. It was named the #1 most innovative school in the country six years in a row by U.S. News & World Report. ASU is in the top 1% of the world’s most prestigious universities, according to 2020 rankings announced by the Center for World University Rankings.

Grand Canyon University is Arizona’s premier private Christian university with over 200 academic programs and more than 79,000 students enrolled. It is also home to the West Valley Cyber Warfare Range, a hands-on learning experience for students to fine-tune their skills before heading off into the post-college world.

Maricopa Community Colleges is the largest community college system in the U.S. with more than 650 degree and certificate programs across 122 programs. It is the largest provider of job training and healthcare workers in Arizona, educating and providing training to more than 200,000 annually.

Midwestern University is an established leader in healthcare education, offering programs that focus on the sciences, hands-on experience in clinical rotations, and a patient-focused perspective.

Northern Arizona University offers 171 degree programs to nearly 30,000 students. The engineering program earned a ranking of 46th among all engineering schools whose highest degree offered is a bachelor’s or master’s by U.S. News & World Report’s. NAU is partnered with the University of Arizona to allow students to reap the benefits of the Phoenix Biomedical Campus (PBC), a 30-acre medical and bioscience campus located in downtown Phoenix.

Ottawa University is an institution with over 1,800 students enrolled in its two campuses in the region. The university is student-centered and technology-enabled.

University of Advancing Technology has more than 800 students enrolled, primarily in technology-focused programs, including computer science. UAT’s Mission is to educate students in advancing technology who innovate for our future.

University of Arizona is the top ranked university in Arizona, in the top 40 among public universities nationwide, and in the top 100 among all universities in the country, according to U.S. News & World Report. UArizona is #1 in water resources, #19 among all public university research expenditures, and UArizona’s online bachelor’s program ranks #7 in the country. Forbes Magazine named UArizona as one of the best places to work in the U.S., ranking #16 among all large employers and #1 out of all employers with headquarters in Arizona.

University of Phoenix is the largest private university in the United States focused on business curriculum. The learning model of the University is designed to provide an active, engaging learning environment that allows for practical application of knowledge and skills.