Very few industries today have avoided the challenge that technology disruption often brings: innovate or die. One of the most recent industries to go through this process is the aerospace industry. The development of new innovation, an increase in global demands and the introduction of private companies like SpaceX, have changed the industry forever and forced innovative thinking to be moved to the forefront.

We continued our fireside chats with GPEC board members by sitting down with Mike Madsen, the president and CEO of Honeywell Aerospace. His colleagues Karen Mattimore the vice president of human resources and communications and Mike Steward the vice president of engineering also joined the conversation. Mike Madsen and his team shared that the long life cycle and complexity of the industry allowed the aerospace sector to remain in its own silo of innovation longer than other sectors. Madsen shared with us how Honeywell has been able to build on the success of their legacy operation and infuse positive innovation driving mindsets into the fabric of their culture. 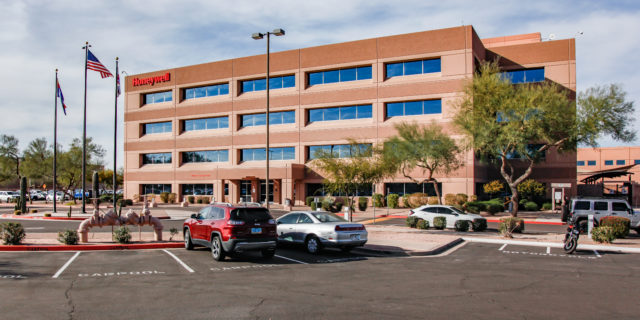 Serial thinking is a close-minded approach to development and leads to missed opportunities. This approach assumes that A+B=C and there is no other way to get there. In the past, Honeywell would be given a problem to solve and would put their minds to it and create a solution. In any given project, technologies in all phases of build out are not all brought to fruition and those innovations are typically viewed as research and development costs. Today’s speed of development and competition often does not give innovators the space to operate on such a linear process and still be profitable. The serial thinking mindset must be put away and a more parallel way of thinking must be adopted.

For Honeywell, this meant creating opportunities where they would bring in venture capitalists, universities and entrepreneurs to showcase the technologies that have already been developed in order to brainstorm new uses. Madsen pointed out that collaborating with fresh minds not only brought new uses for old or discarded technologies and ideas, but also sparked fresh thinking for new solutions. He stated that some of their best products tend to be birthed from other ideas that were developed years beforehand, “It’s fun to see how time and time again, we’ve created a solution to a problem before knowing the issue even existed.”

One of the quickest ways to kill innovation is to assume that the way something has always been done is the way it should be done. Madsen calls it ‘Anti-Agility’ when someone actively resists change and innovation. Here is the tough reality: the market will eventually get the change it desires, either from you or it will get it from someone else. Today’s fast-moving market requires businesses to question their processes and create more efficient developments to remain viable. The most agile companies are rewarded for their flexibility and speed.

To stay agile, Honeywell created a team fully dedicated to innovation – which challenged the leadership to change their mindset on how a team must function. In order to be successful, the leadership determined it was best to remove management oversight and trust the innovation team to function however they deemed best. The innovation team’s main responsibility is to develop breakthrough technologies that are not built on existing properties and have the potential to generate $100 million in revenue in five years.

The desire to not change, to be anti-agile, is rooted in the fear of failure. Failing cannot be feared in an organization that innovates. Instead, failure needs to be viewed as a stepping stone towards success. The challenge for leadership is to find the proper expectation that drives the development of innovative ideas. Understanding what is anticipated from the team enables them to take risks without worrying about consequences.

In an effort to push fear thinking to the curb, leadership was clear about their expectations for the innovation team. For example, they fully expect that 66% of their ideas will be shot down and after further development, another 17% or so will also be put out to pasture. This sets the expectation that if even 20% of their work is accepted it’s a success.

Because failure is part of the process, rejection is not taken personally and is often anticipated – but more importantly, learned from. Even still, Madsen regularly tells the team, “No pity parties. We still like you. You’re doing great.” It took some time, but now the innovation team understands the process and accepts the results without fear of losing their jobs. As a result, the team is now more bold and risky with their ideas, stretching well beyond what the normal development process would ever allow. If you’ve experienced these mindsets, or are even currently looking at one of them across the office, you’re not alone. The good news is that the Greater Phoenix community is filled with innovative companies and leaders that have experienced the same challenges you’re currently faced with. GPEC is focused on bringing the best companies and entrepreneurs to our unique economic ecosystem to drive technological innovation and development. If you are an innovator and want to be part of our growing community or connect with other like-minded leaders, engage with us here.

Have a story to share? Tell us about it now.