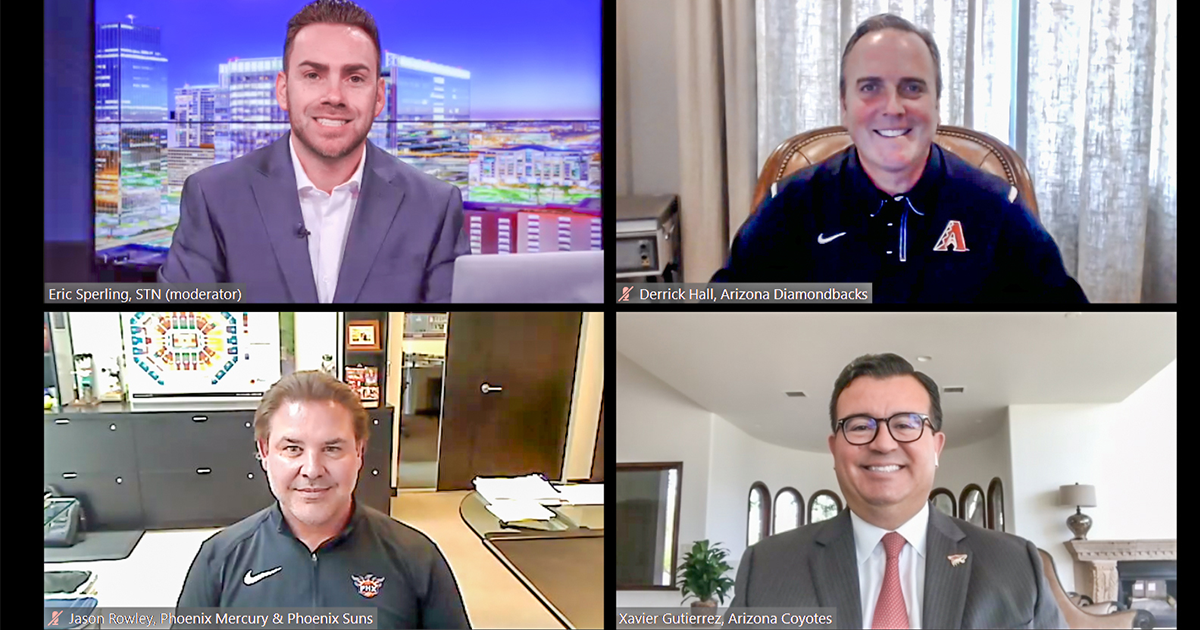 Recently named president and CEO of the Coyotes, Gutierrez kicked off the discussion with a candid response around the current state of the sports industry and where the organization’s focus is.

“Challenging times for us in sports, folks in the community and in general dealing with both a social, health and economic crisis,” he said. “First and foremost, we’re looking at safety. We’re looking at the health, not only of our players, our staff, our trainers, but all of our team members, all of our pack.”

Hall and Rowley have taken the same approach as it relates to their teams despite the economic headwinds.

“We are in a situation where we’re going to lose millions of dollars and as an industry, you know, billions of dollars,” said Derrick Hall, president & CEO of the Arizona Diamondbacks. “We’re in the business of gathering crowds and we haven’t been able to gather any crowds.”

“It’s a reality. Sports has been impacted,” he said. “We can’t have fans in the stands, our television rights, our radio rights, all of those have been impacted.”

The Coyotes qualified for the first round of NHL playoffs for the first time in eight years, but the fanfare typically surrounding a playoff run took on a different form with the organization working from home, and games being played at dedicated sites with no fans present within the league’s bubble in Edmonton and Toronto, Canada. Like most industries facing adversity as a result of the pandemic, sports teams are having to pivot to keep fans engaged and develop unique ways of staying connected to their communities.

“It’s incredibly exciting for us. We simultaneously launched a marketing campaign called the ‘Howl Yeah’ campaign that was really punctuated by our howl towels that we distributed throughout the Valley,” said Gutierrez. “That is definitely a campaign that really helped. It was a rallying cry in these challenging times, and it will be something that we continue to the next season.”

Jason Rowley, president & CEO of the Phoenix Mercury and Phoenix Suns, says his organization is facing the same challenges as every other industry in terms of operating in a remote environment.

“It can be difficult, you know, doing things through teleconference and so forth,” he said. “It’s up to all of us to try and find ways to allow people to still connect.”

Rowley is overseeing the teams $230 million arena renovation project and the building of a $50 million training facility, which is an added variable in the workforce structure.

“It’s going to be a point of pride for the community,” he said.

These franchises are staples in the Greater Phoenix community and are not only focused on the tasks at hand on the field, court or ice, but addressing the needs of their fans and fellow citizens.

“We’ve done an incredible amount of philanthropic efforts around water and food insecurity in particular. Basic needs that our community members need,” said Gutierrez. “We as an organization are going to be very focused on us being top of mind leaders in helping convene and be part of the solutions of this community.”

Hall said he’s proud of the local teams for “what we’ve done for the community.”

At the onset of the pandemic, which coincided with Major League Baseball (MLB) Spring Training, the D-backs committed more than $1 million to the local community.

“These are the times where we need to step up even though we do have such demanding and challenging economic times for ourselves,” said Hall.

Rowley has led the efforts of his organization with the delivery of critical PPE in lieu of cash donations based on feedback from charities. He also applauded the efforts GPEC and business leaders around the region for doing their part.

“They’re [GPEC] a terrific organization,” he said. “In a difficult time stepping up for not just the business community, but the market as a whole.”

With the MLB modified season in full-swing and Arizona’s COVID numbers improving, Hall addressed the question webinar attendees and fans alike have been asking about.

“I would say it’s highly unlikely that we would open our gates to fans this year,” he said. “It just doesn’t make sense at this point.”

“If you open up the building and had an event here, setting aside personal responsibility, you’d probably sell the thing out,” he said. “The desire that people have to have professional sports and entertainment, that live setting, that’s not going away. I do think people’s attitudes might be a little different. Everybody is going to expect a level of safety and protocols in place when people come back to live sporting buildings.

That points to the type of sports town Greater Phoenix is.

“This is an absolute hotbed of sports and entertainment, not just in the nation, but literally in the world,” said Rowley. “It’s up to all of us as leaders to kind of step up and be able to get us back on track and provide all the things that people love for living in this community.”

With so much uncertainty surrounding the return to normal as it relates to sports, Rowley discussed what his organization is doing digitally that is different from year’s past.

“We had a pretty robust effort to drive interest in our broadcast,” he said. “We also set up what we called a second screen experience, which we had not done in the past. People could watch the broadcast on television, and they could also watch a second screen on their phone or on their tablet that had a different level of content.”

“Why weren’t we doing this to begin with,” said Rowley. “I think those types of things coming out of this are going to give us all the opportunity to engage our fans at an even more unique and higher level.”

Hall and the D-backs have taken a similar approach, and while they have the attention of the fanbase, they’re looking to capitalize.

“We’re trying to get eyeballs glued to the screen,” said Hall. “One benefit has been the ratings are through the roof. They’re [fans] listening to our games, they’re watching our games, they’re streaming our games. While we have that captured audience, then we’re directing them towards future ticket purchases.”

“The silver lining is really the utilization of technology,” he said. “We certainly as an organization really wanted to accelerate the tech enablement. Not just in the way you’re engaging with fans, but when you’re engaging your corporate partners.”

Moving forward, the Coyotes will focus on technology and the delivery of content.

“More two-way rather than just, you know, static engagement,” he said. “Second screen, third screen. We had a ‘Howl at Home’ campaign, which was really an interactive trivia, the types of the same game experiences that we do have when you’re at Gila River [arena].”

Nobody knows when in-person sporting events will return, but Hall gave attendees a look at some of the strategies in the D-backs playbook that will allow for a safe stadium experience.

“We’re talking about contactless, cashless ways of getting back to the ballpark,” he said. “Entering certain gates at certain times that you’re assigned, getting food that is ordered only on mobile and you’re notified to go pick up without touching anybody.”

While new to the Greater Phoenix sports community, Gutierrez understands the impacts sports have on this region.

“The absence of sports really showed the primacy of sports,” he said. “It really showed what sports means not just in terms of convening and entertaining, but what it meant to the culture of this community.”

“Sports has a unique position, so that’s what leaves everyone, I think, on this call and all of our fans of our respective teams so optimistic,” said Gutierrez. “Sports can be this rallying entity that really brings communities together.”