At the end of 2022 and through early 2023, Greater Phoenix has turned into a hub for major sporting and entertainment events — drawing crowds from all over the world, in-person and at home. Super Bowl LVII alone will be broadcasted to more than 130 countries in 30+ languages. When analyzing the benefits of hosting these major events, it’s all in the data.

Executives with the Super Bowl Host Committee, The Thunderbirds, WM Phoenix Open and Fiesta Bowl joined a recent GPEC Regional Report to discuss how these events impact the economy in Arizona and provide details on the charitable components that benefit the region.

“What the Phoenix area offers, I think, is unmatched. When you turn the TV on and you see the environment of Arizona, why wouldn’t you want to come here?” Cozby said.

The Arizona Super Bowl Host Committee is a nonprofit group that works to create lasting social and economic change in the community and showcases how Arizona is a great place to work, live, vacation and do business, Parry said.

Super Bowl LVII will be the fourth time Arizona has hosted the NFL’s championship game. Parry shared that in 2015, the last time Super Bowl was hosted in Arizona, it brought 120,000 visitors to the state, had an economic impact of $719 million and generated $2 million in AZ nonprofit grants that positively impacted 400,000 local youth. The current host committee estimates this year's event will generate an economic impact over $500 million, plus $2 million in community nonprofit grants.

The host committee created the Business Connect Program and the Legacy Grant Program to support local organizations and is striving to make this the greenest Super Bowl yet with several programs in place to decrease carbon footprint.

“We know what a great place Arizona is but it's very competitive to get these additional events,” Parry said. “We need to stay on our game as a state and look to the business leadership and the elected officials that have invested so much in making Arizona great. We need to keep that up so we can continue to have these things available to our residents and our businesses.”

With Super Bowl LVII taking place the same weekend of the WM Phoenix Open, there will be more than 300 related events happening around the region.

The Thunderbirds and WM Phoenix Open

The Thunderbirds are a nonprofit organization formed in 1937 to promote the region through sport and distribute monies raised from the WM Phoenix Open. They currently have about 330 total members, made up of regional leaders with an interest in community and sport, including GPEC President & CEO Chris Camacho.

The popularity of the tournament draws tour-leading crowds, with thousands of people attending the WM Phoenix Open in Scottsdale each year. The Thunderbirds utilize about 5,100 volunteers to handle the swelling crowd, whereas a typical PGA tour event has about 1,500, says Cozby.

“We simply could not do this without the support of the community and companies that spend their money and time but that gets us to our next point. We wanted to stop announcing attendance because we want the only number for people to focus on when you think about the WM Phoenix Open is our charitable give.”

The 2022 WM Phoenix Open distributed $10.2 million to local charities, with $176 million given since the inception of Thunderbird Charities. The Open is not only one of the strongest charitable events on the PGA tour, but also the largest zero-waste sporting event in the world, Cozby said.

With WM as the title sponsor, "The Greenest Show on Grass” diverts 100% of materials away from landfills. Due to The Open’s successful sustainable practices, WM now manages sustainable efforts for the entire PGA tour.

Cozby reminded the audience that admission for the WM Phoenix Open is free Monday, February 6 and Tuesday, February 7.

“We try to make it as easy as possible to come to our tournament, and if you spend a little bit of money just know that it's going to go to a good place when it's all done.”

“We are owned by the community,” Whitehouse said. “What we make, we give back.”

He explained how the organization builds grass fields all over Greater Phoenix each year to give everyone a safe place to play.

Whitehouse credits the organization’s success to its 3,000+ volunteers, who contribute more than 26,000 hours each year to help plan, fundraise and execute the events. Brad Smidt, senior vice president, business development, is on the Fiesta Bowl’s

“We're very fortunate to be in this state and our organizations have been so successful because of the support we get from the community, whether it's through volunteering, sponsorships or just coming out to the events,” Whitehouse said.

Learn more and check out the festivities: 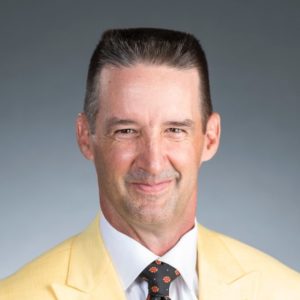