That, in a nutshell, says Chris Camacho, president and CEO of the Greater Phoenix Economic Council, is why companies continue to invest their capital to set up shop and do business in Phoenix and its surrounding communities. The fact that Arizona has made it easier to do business in the region is a plus.

In a recent interview, Camacho discussed the greatest business assets of Greater Phoenix and what his area is doing to attract even more jobs and industry.

What are your region’s greatest selling points to businesses?

CAMACHO: We hit an all-time high in prospect activity this past year. This was the most active quarter we have seen in our history. A handful of reasons explain this. First, we are one of the fastest-growing markets in the U.S. with over 100,000 people moving here each year. We maintain a very affordable cost of living while having our cities and counties invest heavily in modern infrastructure like transportation and education. We are becoming the nerve center capital of corporate services in the United States. Companies in New York City, Chicago and Los Angeles are looking for locations that have limited or no natural disasters, a great operating environment, and a wealth of talent and scalability.

Greater Phoenix is one of the fastest-growing nerve center hubs today. Companies are selecting Greater Phoenix for their IT units, data centers, security operations centers, etc. All of these come at scale. It is all about labor and affordability.

What business climate improvements has Arizona made in the last two years?

CAMACHO: Arizona has continued to modernize our economic development tool kit. Quality Jobs Tax Credits are more usable for companies. Firstly, we have heavily focused on our regulatory framework. It has allowed new programs to evolve. We have created America’s first regulatory sandbox program. FinTech, blockchain and crypto firms can come to Arizona to test and innovate their new product delivery for up to two years. Many are looking at us for setting up the testing of their new FinTech products.

Secondly, we have been to London, Singapore, Dubai, etc. We have begun to establish reciprocity agreements. Firms can test in their home country and here.

Thirdly, we passed HB 2191, recapitalizing the state’s angel investor capital tax credit. It provides a tax credit to investors to support our startup ecosystem. Up to 30 percent state tax credit can be earned by investing in Arizona enterprises. Fourthly, Gov. Ducey eliminated over 600 regulations this past year. His goal is to provide certainty on the business regulation side and provide efficiency in streamlining state government.

In short, we are keeping taxes competitive, investing in education and ensuring political certainty.

What have been some of Greater Phoenix’s biggest economic development wins of the past year?

CAMACHO: Deloitte announced an information and IT center in Gilbert. They are creating 1,500 jobs at an average wage of $95,000 per employee in a 100,000-sq.-ft. office project. USAA did another expansion of 700 technology jobs here in 150,000 sq. ft. in a consolidated Phoenix campus. Benchmark Electronics, which does white-label Internet of Things work in defense and aerospace in design engineering and electronics support, moved its headquarters from Texas to Arizona in October of 2017.

Union Bank announced a major cybersecurity operation of 785 jobs in Tempe near Arizona State University. Chronos Telecom expanded its R&D center in Scottsdale for cybersecurity. Some 42 new companies expanded or relocated here in the past year, representing almost 6 million sq. ft. of real estate and more than 8,600 new jobs. These capital investments are projected to create 15,000 to 18,000 new jobs for the region over three years. 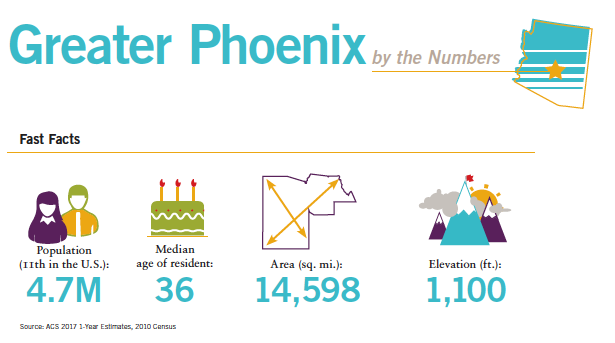 Most of these new jobs will pay an average annual wage exceeding $80,000 — or almost double the county median. We are no longer the call center capital of the West; we are now the mission critical center of the West. The key ingredient is talent. A change in site selection measures is now heavily weighted to the talent coming out of our schools.

ASU has over 22,000 engineering students today and 100,000 students total. ASU is the largest public university system in the U.S. We have 196,000 community college students too. We have scalability of labor. As national unemployment dips below 4 percent, we can produce labor unlike most places around the country.

What do you plan to focus on in the year ahead?

CAMACHO: We will continue to support these companies that are headquartered in high-tech and highly regulated areas in the strategic optimization process and finding high value locations. About 23 percent of our pipeline is in California. International prospects are one-fourth of our pipeline. They are coming from London, the Netherlands, Germany, Singapore, Taiwan, Canada and Mexico too. We will focus on technology growth companies that are looking for labor locations they can scale.

“Arizona has historically been known for attracting retirees, and yet Greater Phoenix is the fifth-youngest market in the U.S. with an average age of 36.”

What is the global brand identity of Greater Phoenix?

CAMACHO: We shifted it to The Connected Place. It has morphed significantly. We talked about the pivot a year ago. With Intel going into autonomous vehicles and AMEX moving into blockchain, Greater Phoenix is at the pinnacle of the inflection point of blockchain, cryptocurrency, autonomous vehicles, wearable technologies, etc. We are seeing many startups in the connected device world.

How did Greater Phoenix become such a hotbed of talent and R&D for autonomous vehicles and blockchain technology?

CAMACHO: We have had a fair amount of policy adoption in blockchain. Smart contracts can be litigated in Arizona. We met with a lot of companies in this field. We are seeing impactful change with integration of blockchain. A lot of IoT tech is being tested in Greater Phoenix. We are becoming a hub in the U.S. for these technologies. In the driverless cars arena, we are building an innovation institute of sorts focused on testing. This will be created to validate the safety and testing of these vehicles.

What is your message to business executives in other parts of the U.S. and abroad?

CAMACHO: Being such a migratory market, the most recent movers said that this is an easy place to live and an easy place to be new. We are the fifth-largest city in America. This is a meritocracy. New businesses and new people can plug in quickly. Greater Phoenix is becoming a melting pot of the U.S.

Arizona has historically been known for attracting retirees, and yet Greater Phoenix is the fifth-youngest market in the U.S. with an average age of 36. We still have retirement communities, but for the most part, we offer a very young labor force. We are building world-class communities. People have choices. Our city centers are becoming unique and hip.

We are so different from the Greater Phoenix of 20 years ago. This has created quite an eclectic cultural scene. We have seen radical change over the last seven years, and we will see a lot more change in the years to come. 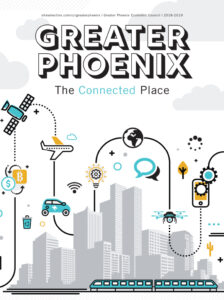