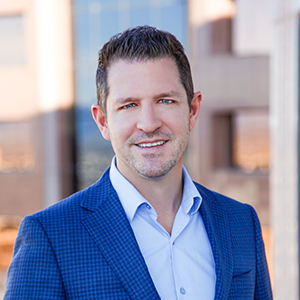 A proven leader with more than 15 years in executive management roles, Chris Camacho serves as the president & CEO of the Greater Phoenix Economic Council (GPEC), one of the longest-standing public-private partnerships for economic development across the country. Chris served as the organization’s executive vice president from 2008-2014 before being named president & CEO in 2015. As chief executive, he has been instrumental in the region’s technology and advanced manufacturing sector growth and led the attraction of more than 515 companies during his tenure, creating more than 95,000 jobs and $26.6 billion in capital investment. Some notable projects include TSMC, Apple, Silicon Valley Bank, Microsoft, GoDaddy, Yelp, Amazon, Garmin, General Motors, ElectraMeccanica, Zoom, HelloFresh, and headquarters including Benchmark Electronics, Carlisle Companies and Rogers Corporation. Chris leads the development and execution of the region’s strategic economic strategy, oversees domestic and international business development, and ensures the market position remains competitive through coordination with partner organizations, private sector leaders, and municipal and state leadership. He has particular expertise in emerging technology, tax policy and international economic development.

In October 2021, Chris led GPEC to being recognized as the top economic development organization globally by the International Economic Development Council a year after being named the top EDO in the U.S. in 2020. Chris was recognized as one of ‘North America’s Top 50 Economic Developers’ by Consultant Connect in 2015, 2016 and 2021. In 2018, he was honored as ‘Man of the Year’ by the Arizona Hispanic Chamber of Commerce and named ‘Most Admired Leader’ by the Phoenix Business Journal. In 2013, he was named among an international group of ‘40 Under 40’ by Development Counsellors International, a New York-based firm recognizing rising talent in economic development. And in 2012, he received a ‘40 Under 40’ award from the Phoenix Business Journal, which identifies talent throughout Arizona each year. Chris is the past president of the Arizona Association for Economic Development (AAED), and in 2011, AAED named him ‘Economic Developer of the Year.’

His professional affiliations include serving on the boards of the Arizona Hispanic Chamber of Commerce, the International Economic Development Council, Partnership for Economic Innovation and Valley of the Sun United Way. Since 2016, he has served on the U.S. Investment Advisory Council to advise the Secretary of Commerce on foreign direct investment policies and strategies. Chris is also an Honorary Commander at Luke Air Force Base and a member of The Thunderbirds.

Before GPEC, Chris served as president & CEO of the Greater Yuma Economic Development Corporation (GYEDC) from 2006-2008, after serving as the business development manager for two years. During his tenure, GYEDC helped 35 companies and 3,500 jobs locate in Greater Yuma, resulting in more than $350M of capital investment. Some of the larger projects included Alside Window and Door, Northwestern Industries Inc., Johnson Controls and Shaw Industries.

Chris currently resides in Scottsdale with his wife and three children and enjoys golfing and playing soccer with his family in his free time.